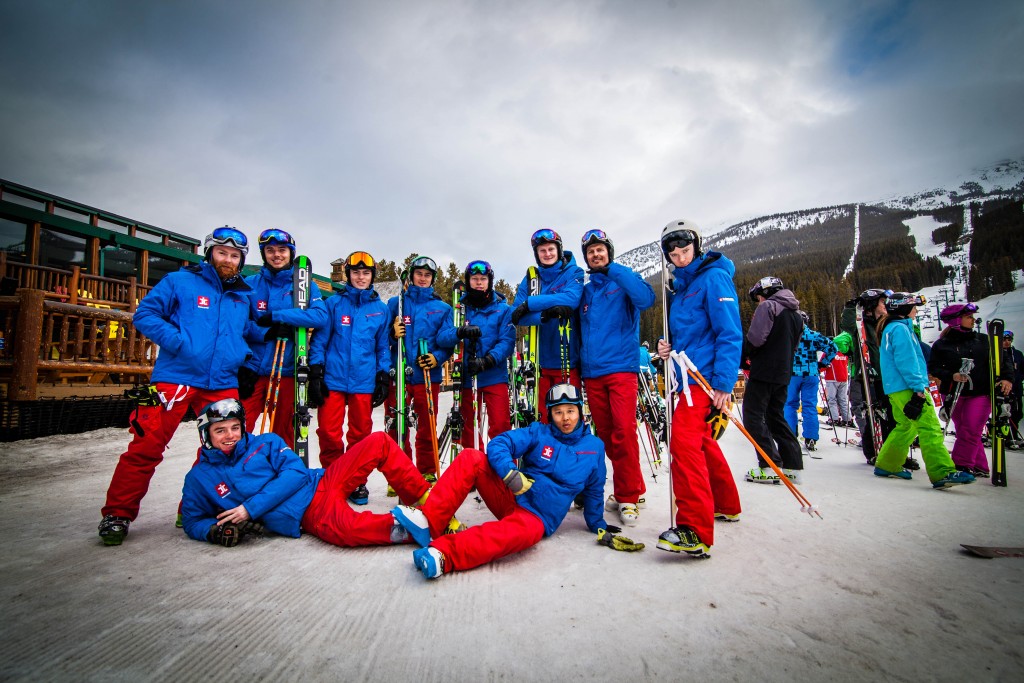 The possible overall results were one of the following types: Pure Mountain Goat; Rockstar; The Family Favourite; Steady Eddy; Are you sure you’re a ski instructor; Sleazbag. We will reveal the overall result at the end, but before that, take a look at the best things we learned from the quiz.

45% of the instructors that took part in the quiz have been doing the job for over 5 years, one third of them had only been teaching for 1 or 2 years and the rest were in their 3rd and 4th year. The majority of instructors worked in the States, Canada and France but this does not take into account nationality and 70% of these claim to do back to back seasons, or ‘living the dream,’ as it is often referred to.

This being the best job in the world, we asked what age they plan to retire from the slopes and the majority planned to never give up, the next biggest group (20%) plan to pack it in during their 30’s and the rest will pull the plug in their 40’s or 50’s when either their liver or knees give in.

Is being a ski instructor just a job or is it a lifestyle that also incorporates both a passion and a hobby? Some of the questions we asked will help answer that. 63% of instructors say they would never cancel a lesson to go skiing but that means 37% have done it at least once. Reassuringly  the response to the question of losing clients on the mountain, when asked,  60% of instructors claim that this has never happened. 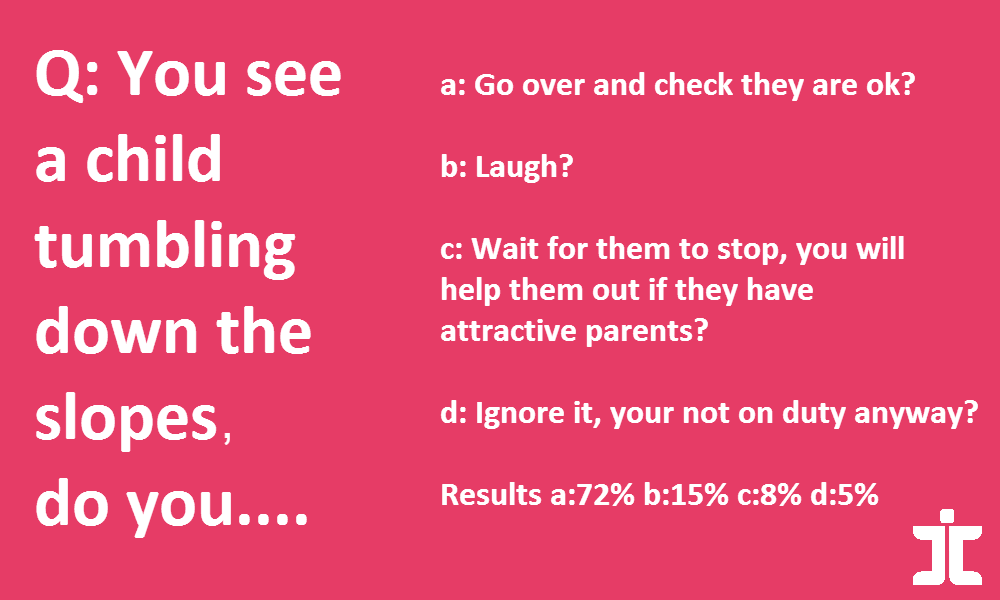 We quizzed the instructors if they were equipment junkies and the frugal side was represented by 32% who claim to own only one set of the essentials and the rest own all the gear and know how to use it.  Sometimes an answer calls into question the honesty of the people being quiz, we only say this as 50% of ski instructors claim that their in-resort accommodation is “Big Enough”, now this could be true or maybe the majority of ski instructors are smaller than we thought, sadly height wasn’t something we included in our quiz. However, 25% say that the majority of their income is spent on accommodation costs.

“15% of instructors own a pair of snowblades”

You will be pleased to learn that the majority of instructors value their skin and go crazy for sun protection, however 25% claim to not use any at all and 22% just Zincing up their kissing equipment. 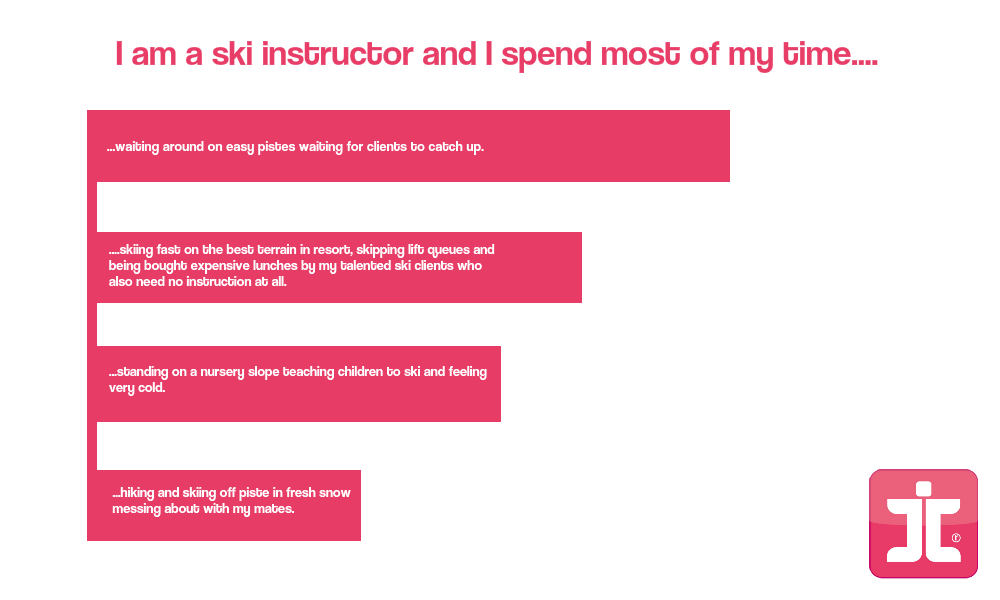 After the actual job title,  the one other thing coveted by those not in the industry is the ski instructors uniform. The quiz revealed that 30% of instructors wear it with pride, 40% see it the same as a McUniform, while 6% confess that they simply couldn’t attract the opposite sex without it.

“No way – Very Unprofessional” was how 67% responded to the question; have you ever been on a date with a client? The rest all said yes!  We then asked if they thought they had been chatted up just because they were ski instructors the result was that 82% of them had.

“18% of instructors claim to have never been chatted up”

You probably thought that every instructor wants to teach in France. Well it turns out that nearly 75% aren’t really bothered. Out of the rest ,17% are keen to work for the ESF and the rest do already. Are all ski instructors self obsessed, arrogant and rude? 78% of the instructors that took our quiz said that this statement was true! 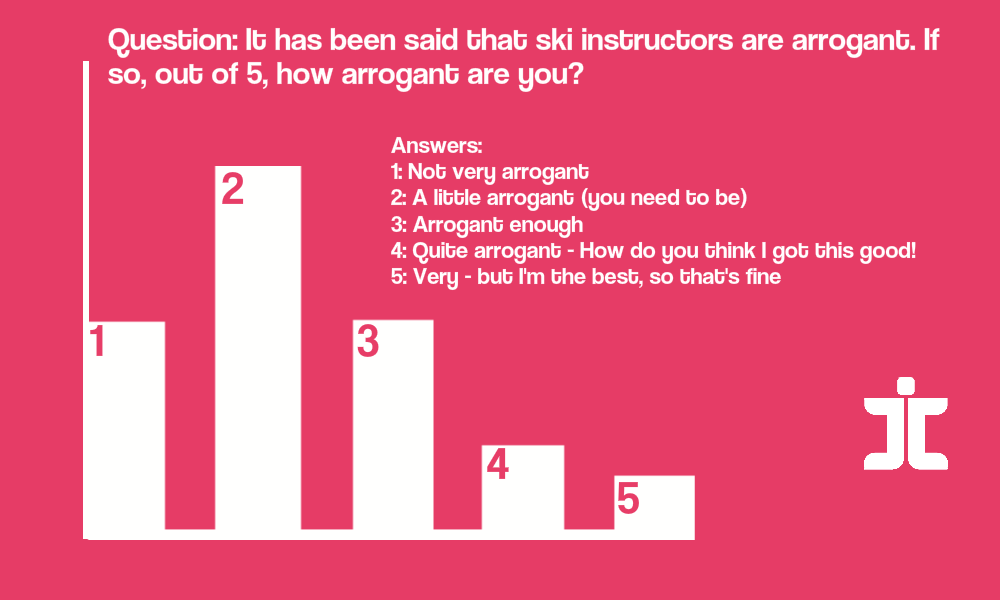 So what was the final outcome, how many of our instructors have been found to be ultimate mountain dwellers and how many should give up the day job?  We discovered that less than 2% of ski instructors are sleaze bags, 4% should find a new career, 8% are family friendly instructors and 70% have been given the ultimate title of Pure Mountain Goat, with the rest either being Rockstars (17%) or Steady Eddies (7%).

Our research is based on the response to a quiz we asked ski instructors to complete in August 2015. If you would like to get more information on the results of this survey please email [email protected] with your request.