Wow. What an action packed week in #BCBanff.

Monday kicked off with an ice hockey trip down to Calgary. Once skiing lessons for the day had concluded, the Basecampers were hurried onto a bus and started their pilgrimage to the Saddledome to watch the Calgary Flames take on the Boston Bruins. After gearing up with Flames jerseys, hot dogs, various beers and a foam finger everyone was brimming with excitement! Boston scored first, second and also third taking a three to nothing lead into the final period. Spirits had dropped a little, and the group were a little deflated. Even Jack Simmons’ foam finger wasn’t being waved with quite the same intensity. Then, suddenly, the Flames scored one…and then a second! The Saddledome swelled with excitement heading into the final five minutes and out of nowhere the Flames pulled the equaliser! The game headed to overtime, and as the final moments ticked away seemed destined to finish on penalties…when suddenly the puck was in the net! The Flames has scored the winner with three seconds to play! The Basecampers (along with what seemed like the rest of Calgary) jumped up and cheered like madmen, joining in noisily with the ‘GO FLAMES” chant. I think we have several new ice hockey fans on our hands! 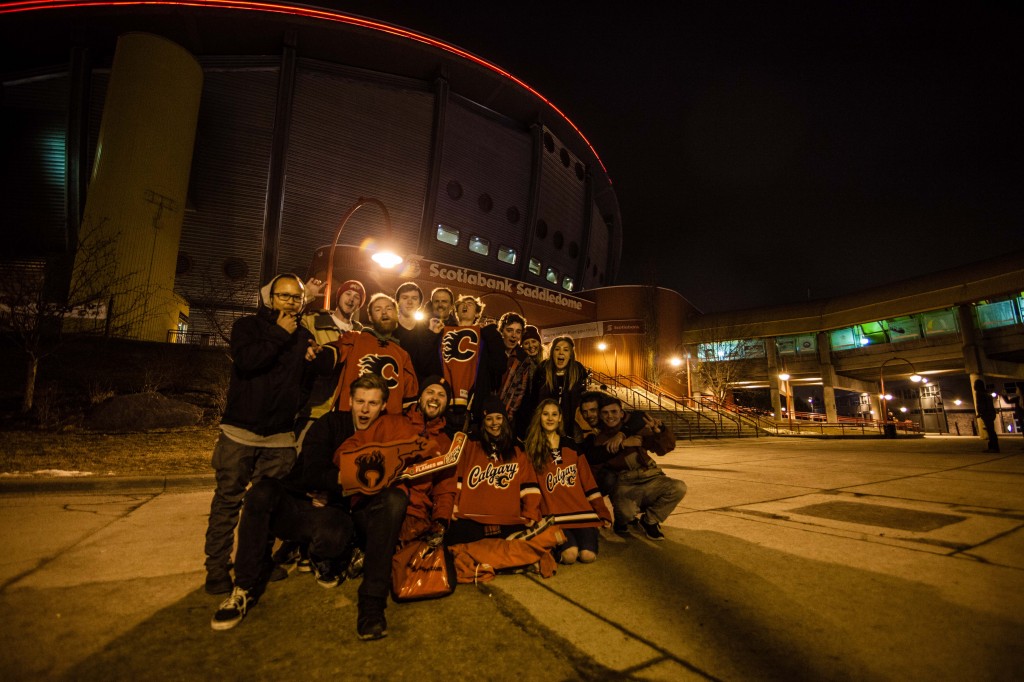 Wednesday’s cat-skiing trip was sadly cancelled, to be replaced with a Revelstoke trip later next month, so all eyes turned to Friday’s heli-skiing and snowmobiling! Both parties had to be up early and they headed across the state line from Alberta to British Columbia. The weather was kind to both parties and the clouds parted to allow the snowmobilers some visibility, while the helicopter was able to find fresh line after fresh line for the skiers and boarders to cruise down. Everyone returned bouncing off the walls, and the sentence “best day of my life” was heard often. Everyone had a story, an epic line hit, a near crash or funny moment. After the adventures of the previous week, Saturday was a fairly quiet day on the slopes for the Basecampers with only those shadowing lessons heading up. The others caught up on some much needed sleep, rested their weary legs or took a walk down to the frozen Vermillion Lake. On the way back, a chance encounter in the Banff Recreation Centre allowed several Basecampers to watch the Banff female team take on the Mexican National team in ice hockey! The week was rounded out with a trip to Banff’s natural hot springs for a relaxed soak and relaxed reflection on the busy week just gone.

The team meal this Sunday took place at Basecamp favourite American/Mexican Chilli’s, and both myself and Andrew had very little to say as the Basecampers have been making our lives easy. This week is a more typical school week, with lessons taking place Monday to Thursday for the snow-boarders and Monday to Wednesday for the skiiers. Thursday and Friday will be the first days of assessed training for the Level Two CSIA instructor exams, with the final few exam days coming in March. On Saturday, weather permitting, the cancelled Kicking Horse trip from earlier in the week has been rescheduled and the crew will cruise further into Alberta to test out a new resort.